We are standing in a circle looking down at Cooper.  Who is spread eagled on the ground.  Eyes closed.

“You mean that you just knocked yourself out with your own paddle tennis racket?”

Griffin is holding the shaving cream.

“No. It goes on your forearm.”

Griffin has a tiny red scratch on his lip.

“Am I disfigured!? Is there blood? I CANNOT BE SEEN!”

We started out the year in Quebec City.

It’s actually pretty far to Quebec City.  LIke really far.  LIke “whose idea was it to go to Quebec City” far.  I am annoyed.  And tailgating the car in front of me.  Which is driving at 59 mph.  Without another car in sight.  Why did the Canadians come up here anyway?

“Well, your eroticness is bothering that person.”

“Can I assume that you mean erratic?”

We did have poutine.

Which basically means you won’t go to the bathroom in Canada.

Cooper and I went on a service trip to the Mexican border in Texas.  And found it full of

normal people.  Well.  Except for Cooper.  Who wandered through the airport dressed like a moose.  You know, I am sure you think I make all of this stuff up.

In fact, they are flying out of his mouth like popcorn which has kept the tooth fairy particularly busy.  After 4 sons and 80 teeth, the tooth fairy seems to be demanding workers benefits.  Sometimes it has taken three nights of eager attempts to lure him back to the Meyer house.  And a foot.  In the middle of his back.  Or at least that’s what I imagine is happening at the workers union for tooth fairies.

Christian has started to ask the Tooth Fairy if he can keep his tooth and still get money.

“What are you going to do with it?”

We both look down at the white spec on the table.

So I can’t wait for his wedding rehearsal dinner when we can give him back his teeth.  That have been sitting in a box.  For 20 years.  Nostalgia!  If the zombie apocalypse starts in Concord you will know where it came from.

Ben is a sophomore in college!  Colby.  In Maine.

Which means he has opinions.

About a lot of things. Like whether his parents ever know what they are talking about. But he is indeed creative.

Through events too inane to even explain here (which says something), we ended up with a hole in our roof.

“What if we put an umbrella through it?”

“Well, stuff an umbrella through the hole, then we can open it, and that will keep the water out.”

We both look up at the roof.

60 minutes later, we indeed have a golf umbrella open and sticking through the roof.

“It looks like we are holding Mary Poppins prisoner in our attic.”

I cut Griffin’s hair the other night.

Fun fact.  I have been cutting all of their hairs since they were born.  Trying to keep my backup career alive.  They’ve not been bad except that one time that Griffin came out looking like Lloyd Christmas in Dumb and Dumber.  Ah well.  Win a little.  Lose a little.  Pride.  Of Griffins.

So on this night Griffin proceeds to pick up all the hair clippings and stuff them in his belly button.

Which ended up looking like he had eaten his brother.

Through his belly button.

So you can think about that for a while.

Polly and I did get some time away together and went to Switzerland!

While Polly was spinning around singing the Sound of Music, I was playing with the cows.

The big ones have big bells and the little ones have little bells.

So that you can tell where they are without having to march all over the place.

So we got some for the kids.

They didn’t think that was very funny. 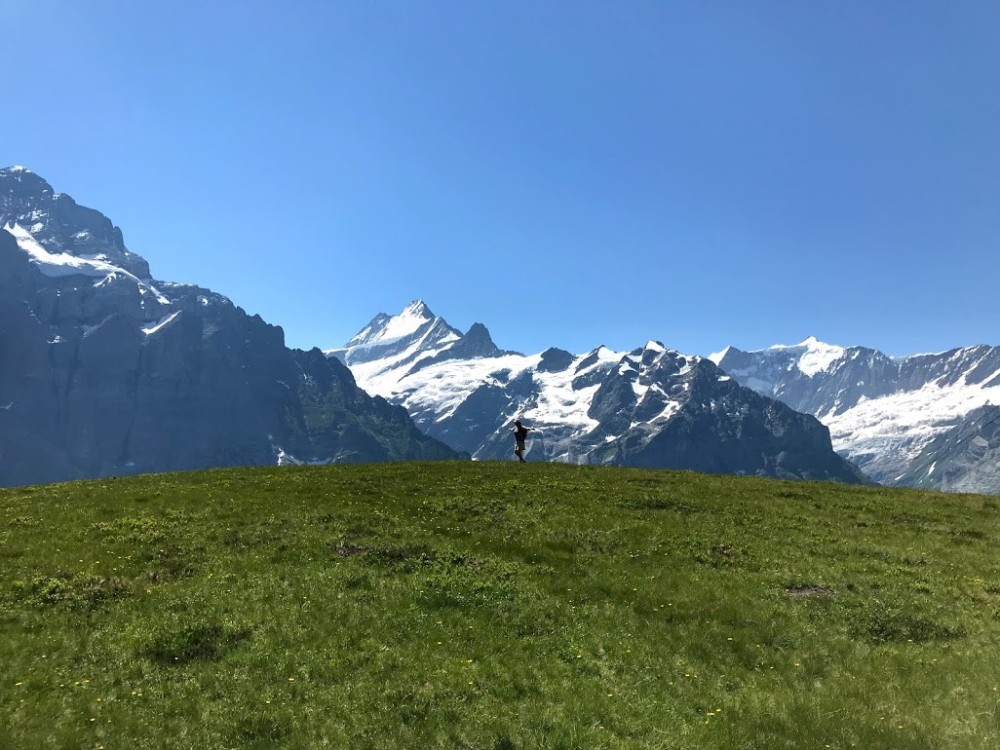 Polly and I are nearing our 50th.  Which I thought was a big deal until a speaker last week told me the people who are going to live to 150 are born already.  But the way we think about it, 50 is the new 40.  Which is the new 30.  Ipso facto, we are 30.  I am starting to believe that data that says your ears grow faster than your head.  Although Polly points out that doesn’t seem to power any correlation to my actually listening.  So come see us before my ears make me look like Princess Leia (Star Wars; hair saucer reference.  Never mind.)

But it is time to say goodbye and Happy Holidays!  We hope our missive finds you in good cheer, surrounded by friends and family and that we get to see you soon!